Evolution isn’t just a one-way street. There are many different types of evolutionary patterns.

This comic illustrates one type of evolutionary pattern known as “convergent evolution”: 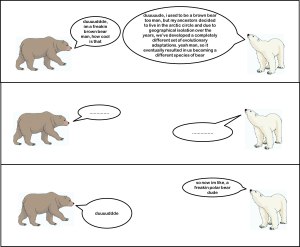 So as you can see, convergent evolution describes two distinct species that have the same trait (i.e. ability to fly), but developed that trait in two different ways. In contrast, divergent evolution describes two groups of the same species (i.e. brown bear) that have accumulated so many different traits from each other over time, that they eventually become two separate species (i.e. polar bears and brown bears) . Often, this happens because the groups become isolated in different environments; however there are a few other ways through which this type of evolution can occur.

2 responses to “Evolution in Comics”